The Squeakie journal is a celebration of all things healthy, kind & inspiring.

Hand Hygiene is all about timing- here’s when to use your Squeakie.

Although its fine to randomly use your squeakie to clean your hands throughout the day, if you are really serious about protecting yourself from germs, hand hygiene is all about timing. Use squeakie at those times when you’re most at risk of infecting yourself, and those times are when you hit germ hotspots throughout your day. As soon as you come into contact with a germ hotspot- and before you rub your nose, scratch your eye or pop food in your mouth, which we do so often without even being aware of it, use your squeakie.

Germs are transmitted by touch, so any object that lots of people touch throughout the day are germ hotspots. Things like atm and eftpos buttons, supermarket trolley handles, lift and traffic light buttons, magazines and newspapers at your local café or doctors surgery, coins and dollar bills, the tap in the public toilet, the photocopier, gym weights, or even innocuous things like switches, handles and railings that lots of people use, are all germ hotspots- and as soon as you touch one of them, you are at a high risk of infecting yourself. So its at these times you make sure you use squeakie, and you do so before you touch your eyes, nose or mouth.

The thing is that a lot of these germ hotspots are not places where you can duck in and wash your hands with soap and water. Also, even if there was a public bathroom that you could handily drop into, there is the issue of the public bathroom itself- from the tap, to the electric hand dryer, to the communal hand towel, to the door on the way out, all are germ hotspots, and throw a little moisture in there, and these are germ hotspots with a very active and high bacteria count. That’s when you need your squeakie.

(Just as an aside, hand shakes are great but be mindful of the sick hand shakers- the people who vigorously shake your hands and then tell you how sick they are or have been- and make sure you don’t rub your nose, scratch your eye or touch your mouth, until you can discreetly squeakie your hands).

Also another tip- when you’re out and about, always sanitise with squeakie before you dive into your muffin, sandwich or sushi, or whatever your on the go meal is. squeakie is also awesome in the office, on public transport, at the airport, in the plane and at the gym, schools and creches where there are germ hotspots aplenty. Or when you are sharing things with someone who is sick. And remember, its all about timing. Use squeakie as soon as you’ve touched a germ hotspot- and before you’ve gone and rubbed your eyes, nose or mouth.

The world’s leading health authorities (The World Health Organisation (WHO) and Centre for Disease Control (CDC) and the Environmental Working Group (EWG))  all agree that clean hands are one of your best ways to stay healthy, and they all agree that the best way to do this is by soap and water or a hand sanitiser with 60% or more alcohol. In fact, Hand Hygiene Australia (HHA) advises that alcohol based hand sanitisers are more effective against most bacteria and many viruses than either medicated or non mediated soaps. HHA goes on to say that in a hospital setting, research shows that an alcohol based hand sanitiser is better than soap and water because its quicker, less drying and results in a significantly greater reduction in bacterial numbers than soap and water, and as such, alcohol based hand sanitisers are the gold standard of care for hand hygiene practice in healthcare settings.

Its also so important that your hands remain smooth, soft and healthy so squeakie has more genuine natural moisturisers than any other hand sanitiser- with bladderwrack extract (sea kelp), rosehip oil, aloe vera and vegetable glycerine- which all in their own right have a hydrating and regenerating effect on skin, and we’ve put all 4 of them together to give your hands serious love. You will not find any other hand sanitiser in the world with this unique 100% natural combination of pure milk whey alcohol and these 4 all natural miracle moisturising ingredients, that still kills 99.99% of germs, and complies with the world’s leading health authorities’ hand hygiene guidelines. The WHO, CDC and EWG only recommend alcohol based hand sanitisers. As the CDC succinctly sums up, alcohol-free hand sanitisers merely reduce the growth of germs rather than kill germs outright, they are more likely to irritate skin, and more worryingly studies show that they may lead to bacterial resistance because the chemicals used in alcohol free hand sanitisers (triclosan and benzalkonium chloride) stay on your skin for hours afterwards before absorbing into your skin, allowing the bacteria a chance to mutate and form resistance. There is no such concern with alcohol because it kills germs on contact and evaporates. (CDC, WHO).

WHO: “Alcohol-based handrubs are the only known means for rapidly and effectively inactivating a wide array of potentially harmful microorganisms on hands.”

With squeakie in your hands, you’re armed with the most natural, effective and safe hand sanitiser in the world. You’re free of both nasty chemicals and 99.99% of germs- and your hands are given serious love with squeakie’s unique and plentiful all natural miracle moisturisers.

So squeakie recap- know the germ hotspots you hit throughout your day, and after touching them, use squeakie before you touch your eyes, nose or mouth. The golden rule of thumb is if it’s touched by a lot of people, it’s a germ hotspot.

pop in your email for a monthly hit
of kindess, inspiration & health

Our Squeakie Kindness Kit includes 2 x Squeakie 50ml bottles. One for you and one for a friend. Kindness can change the world. 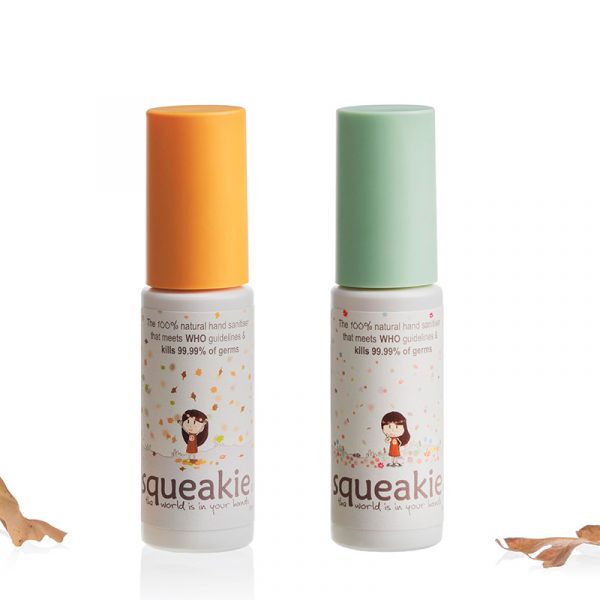